In the heart of an immigrant community in Dallas, the Rev. Owen Ross says his United Methodist congregation of mostly immigrants embodies the scriptural mandate to "love the foreigner as your native-born."

Ross cites Leviticus 19:34 in talking about why Christ Foundry United Methodist Mission is one of some 60 United Methodist congregations standing ready to shelter anyone under threat of deportation.

While there is no law against it, U.S. Immigration and Customs Enforcement has an unofficial practice of not going into churches or hospitals to take immigrants into custody.

Since the election of President Donald Trump, who is expected to make big changes in immigration policies, more than 800 places of worship nationwide vowed to shelter and protect immigrants in danger of separation from their families or being returned to countries they fled.

Many advocacy groups were already fighting the immigration policies of President Barack Obama, who some called the "Deporter-in-Chief" for removing more than 2.5 million immigrants, the most of any presidential administration.

A home for Javier

Arch Street United Methodist Church in Philadelphia has been home for Javier Flores Garcia since Nov. 13, 2016. Flores, originally from Mexico, was due to surrender to ICE but turned to the church instead.

The Rev. Robin Hynicka said Garcia has been living peacefully in the church and volunteers for many church programs, especially those with homeless people.

"His son, Javier Jr., stays overnight most nights. He is 5 and he just does not want to leave his father's side," Hynicka said. Garcia, 40, is a husband and father of three.

Since the news of Arch Street becoming a sanctuary church, Hynicka says he has been getting calls from churches across the country asking advice on how to do the same thing.

Garcia has an attorney who is working on a strategy to get him a visa.

"If you are a person simply undocumented and not connected to any advocacy organization or you don't have an attorney working for a possible path to getting a visa, it is a whole different ball game," Hynicka said.

Bishop Minerva Carcaño took part in a national press conference call on Jan. 17 with other faith leaders concerned about what could happen to immigrants under the new administration.

"We held the press conference in hopes that the administration can hear there is another opinion in this country," said the California-Nevada Area bishop, who also heads the denomination's Immigration Task Force.

"People of faith are saying going after immigrants, building a wall, breaking apart families, rolling back DACA (Deferred Action for Childhood Arrival) which has helped so many young people, is just not helpful. It is not the right or just thing to do."

Carcaño said she is encouraged by the number of churches and places of worship opening their doors to their immigrant brothers and sisters.

"It has warmed my heart how people in our local churches have started thinking of a broader sense of sanctuary … one that is not only in our churches but in our communities, in our schools," she said.

Sanctuary is biblical, she added.

"We forget that sanctuary is an expression of our faith that comes from scripture, from the lips of Jesus who calls us to welcome the stranger. It is a call to discipleship." 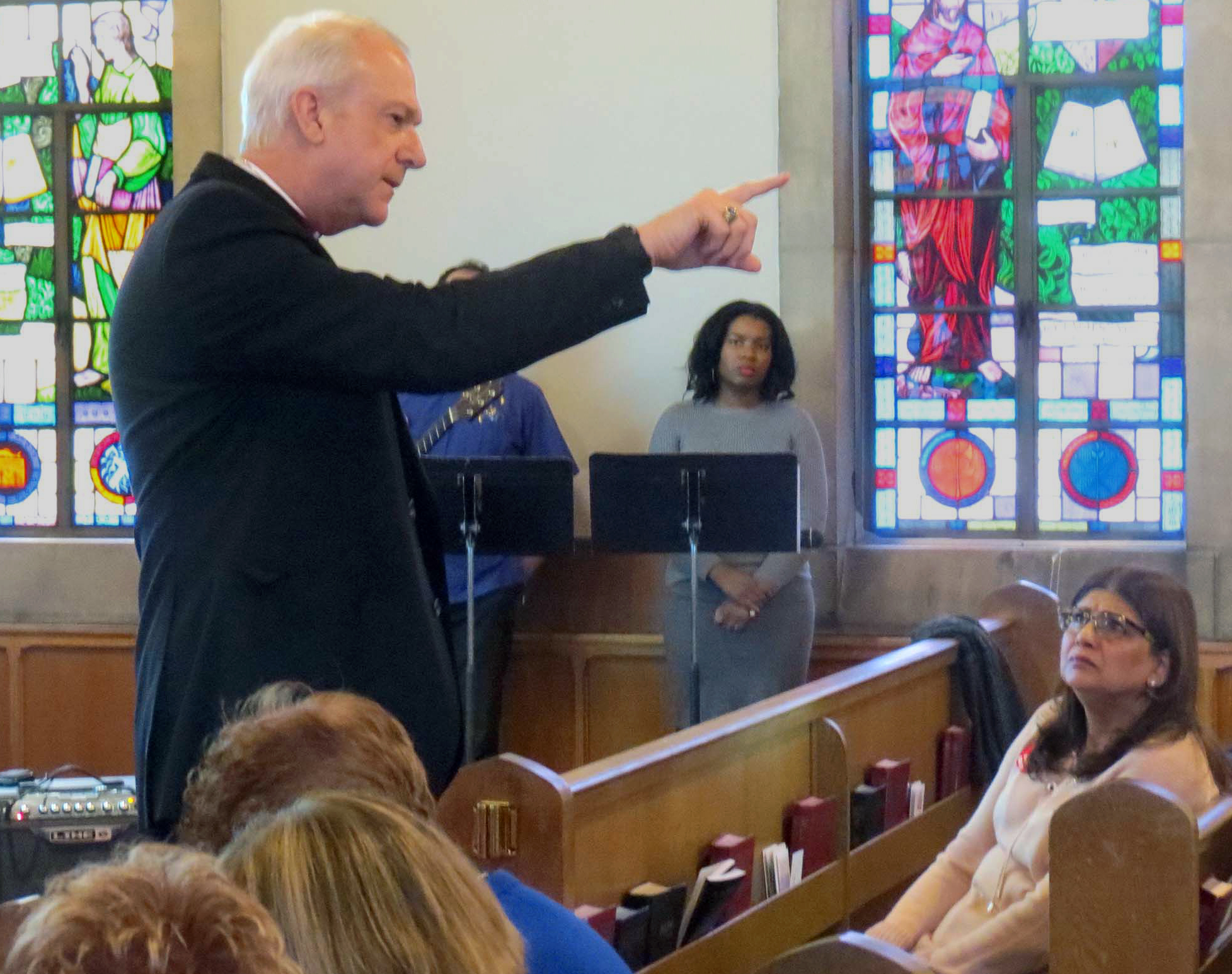 New York Area Bishop Thomas Bickerton held a day of action to take compassion to the streets in a part of the country that has large immigrant populations.

"One of the things we are dealing with is pastor after pastor with immigrants in their congregations who are afraid and very uncertain about their future," he said.

Members of the conference's immigration task force and other church leaders visited a food pantry, participated in a "Know Your Rights" seminar, held a prayer vigil and hosted a forum on immigration issues.

"The goal is to engage with folks who are uncertain and afraid, to hold their hands and pray with them," he said.

The United Methodist Board of Church and Society, the denomination's social justice agency, offers guidelines for churches that want to become a sanctuary church. The toolkit is an ecumenical resource created and shared by many in the faith-based advocacy community, said Jeania Ree Moore, director for civil and human rights with the agency.

"Many in immigrant communities are fearful of what changes the incoming president and administration will make that will impact their lives, livelihoods, and families," Moore said.

"While unpredictable, these threats are not unanticipated. Policy and practice under the Obama administration, along with new challenges under the Trump administration, have been prompting a proactive and broad response for years from concerned communities, faith and secular, immigrant and ally."

The United Methodist Church's social agency has been supporting "Know Your Rights" sessions and engaging elected officials about standing in solidarity with the sojourner, said the Rev. Susan Henry-Crowe, top executive.

"We are challenging a climate of fear with demonstration of welcome and love," she said.

The California-Pacific Conference, which includes southern and parts of central California, Hawaii, the Pacific Islands, Guam and Saipan, announced support for churches committed to being places of sanctuary.

"As the California-Pacific Annual Conference, we unequivocally support sanctuary for the least and most vulnerable in our midst, and we will back this support with concrete action," said Bishop Grant J. Hagiya, Los Angeles Area bishop.

The United Methodist Church's Social Principles states, "We recognize, embrace, and affirm all persons, regardless of country of origin, as members of the family of God."

At the 2016 United Methodist General Conference, the denomination's top lawmaking body, the global church approved a statement opposing immigration policies that separate families that include detention of families with children and call on local churches to be in ministry with immigrant families.

After the election of President Trump, MARCHA, Methodists Associated Representing the Cause of Hispanic/Latino Americans, called local churches to become sanctuaries for immigrants.

"Amidst our political and ideological differences, we are now confronting a greater conflict: intolerance, persecution, discrimination and hatred," said the statement, signed by the Rev. Lyssette Pérez, the group's president, and Bishop Elías Galván, its executive director.

Ross said there is no other contemporary political issue more frequently or more consistently addressed in Holy Scriptures."It is something God's people have always struggled with, and God has been consistent in God's message to God's people about how to respond. It is very disheartening how many of God's people have turned a silent ear to scriptural mandate about how we are to treat foreigners."

Gilbert is a multimedia news reporter for United Methodist News Service. Contact her at (615) 742-5470 or newsdesk@umcom.org