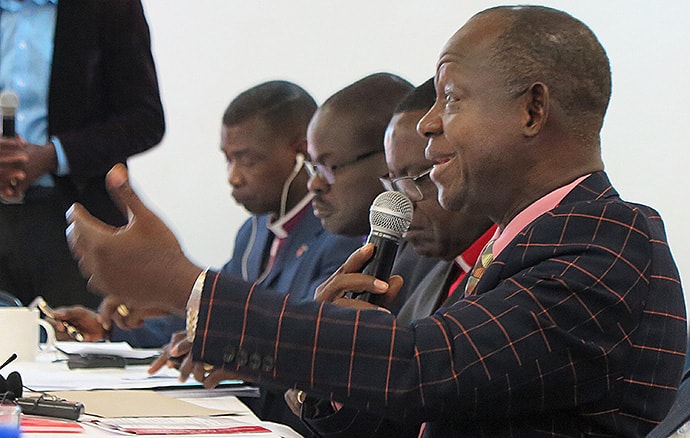 Bishop John K. Yambasu of Sierra Leone addresses a meeting of the Africa College of Bishops in Mutare, Zimbabwe. The bishops said the church would continue in Africa after General Conference 2020. Photo by Tim Tanton, UM News.
Bishops in Africa have resolved not to support any proposed legislations or plans that may result in a split or dissolution of The United Methodist Church.

In a statement at the close of the Africa College of Bishops retreat Sept 2-6, the bishops said the church would continue in Africa after the 2020 General Conference.

“We do not support any legislation that calls for the dissolution of The United Methodist Church. We uphold our values as a connectional and worldwide church committed to ‘making disciples of Jesus Christ for the transformation of the world’,” the bishops’ statement said.

President of the Africa College of Bishops, John K. Yambasu of Sierra Leone, said the bishops would not allow others to set the agenda for the church in Africa.

“We African bishops and the galaxy of informed clergy across this continent must set the agenda for the church in Africa rather than allow others to draft it on our behalf for us to rubber stamp and seal it,” Yambasu said.

The bishops said they were concerned that conversations on the future of The United Methodist Church are taking place in the United States without African representatives.

During his keynote address, Yambasu said the future of the church is not about winning and losing.

“Christ came and died for all of us, and so the church belongs to all of us. We can agree that the debate on human sexuality is not about who wins or loses; it is about all of us winning. Nor is it about kicking others out so that we can stay in. More importantly, it is not about one group of people making decisions for and on behalf of every other group,” he said.

At the meeting, the African bishops reiterated their stance on homosexuality, noting in the statement that they agree, “as an African Church, we do not accept nor support the practice of homosexuality because it is incompatible with the teachings of Scripture.”

At the 2019 special General Conference, held this past February in St. Louis, delegates by a 438-384 margin approved the Traditional Plan, which reinforces the church’s restrictions on ordination and same-sex marriage.

Since then, several groups have developed alternate plans for the future of church, including the Indianapolis Plan, the UMCNext Proposal and the Bard-Jones Plan.

The African bishops’ statement called on the entire denomination to exercise restraint at General Conference 2020, “and work towards an approach to the human sexuality debate in ways that are humane and respectful.”

In an interview with UM News, Yambasu said this year’s College of Bishops retreat at Africa University aimed to sensitize African bishops regarding the impact of decisions on the future of the church in Africa.

“There is a kind of development of preparedness strategy for economic sustainability, functional structure and continuity of programs and ministry already on the continent,” he said.

Yambasu also spoke about the creation of five new episcopal areas in Africa in 2020.

“The placement of five new bishops was a General Conference decision and we therefore expect that General Conference through the General Council on Finance and Administration will provide the needed support for those bishops. However, in the event that funding may not be readily available, part of our strategy as a college is to develop alternative means of support or alternative ways of addressing the issue,” he said. 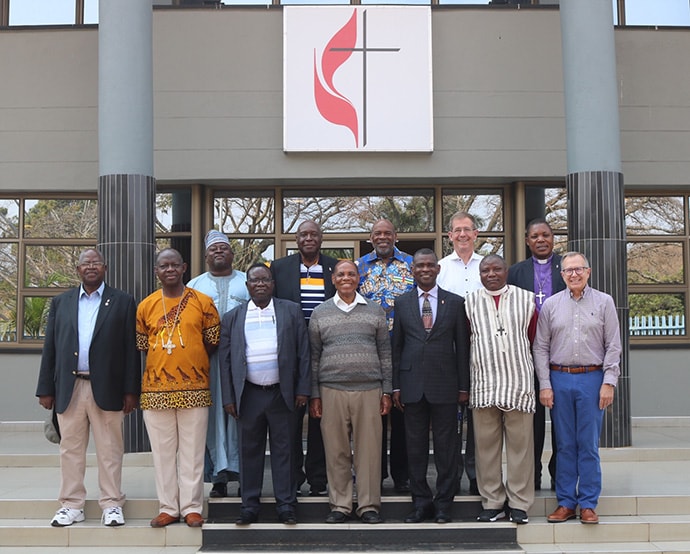 United Methodist bishops from Africa and the U.S. who attended the meeting of the Africa College of Bishops gather for a photo at the Zimbabwe West Conference in Harare. Photo by Eveline Chikwanah, UM News.
Ten African bishops attended the retreat, which was themed “Rethinking the African Church: A Call to Reclaim Our African Identity in Light of Changing Realities in The Global United Methodist Denomination.”

The agenda for the meeting also allowed time for the bishops to consult with whom they identified as traditional U.S. bishops.

Representatives of the Africa Initiative and Renewal Coalition also attended.

“We invited only those groups who requested to be invited. We remain open for other groups who may want to be in conversation with us,” Yambasu said.

Mueller said interacting with the African bishops had been “enlightening, broadening, humbling and, at times, convicting.

“Those of us in the West by nature so quickly try to solve problems that we don’t spend time praying and listening to God, allowing the Holy Spirit to help us discern, nor do we necessarily have the conversation we really need to have with each other,” he said.

Like what you're reading and want to see more? Sign up for our free daily and weekly digests of important news and events in the life of The United Methodist Church.

“This time here broadened that tremendously. I think we have reached the point where there is too much harm being done to each other that it is inevitable that there has to be some sort of untangling of the mess.

“I came away with a pretty much clearer understanding about what’s important for Africa,” Mueller said.

Swanson said he attended the retreat in order to listen to his African colleagues.

“I didn’t really bring a message. What I really wanted to do was to listen and in so doing I heard some things that I felt like I needed to hear, not just with the head but also with the heart,” he said.

“It’s not just a name, but it’s a really valuable asset, the doors that name opens up, the respect it engenders in people who are not United Methodists, even the political figures, economic institutions, education institutions,” he said.

“That name carries a lot of weight in Africa and I don’t think people understand that with their hearts as well as their heads. They don’t understand what they may be losing if the African United Methodist Church loses that name.”

Chikwanah is a communicator of the Zimbabwe East Conference.

A look back at Bloody Sunday’s 50th anniversary

Participants in mediation talk about how agreement was found among markedly different perspectives for the future of The United Methodist Church.